How to Support Your Launch Mindset

Just how exactly can you Support Your Launch Mindset?

Launching isn’t easy ~ it ain’t for the lazy of bones and faint of heart.

Launching is a period of promotion/sales activity which you use in order to gain traction and momentum on your offering.

Now, whilst a launch period does feel physically draining it’s often the launch mindset that gets the biggest battering along the way. There’s so much you need to be thinking about and, left unchecked, there’s so much that can result in a barrage of self talk that leaves you feeling incapable, unworthy and downright ridiculous. Your mind can take you to some quick weird places during a launch period.

Here’s what you need to know…

So, here’s the thing – you have to set off into your launch with a passively good mindset.

If you aren’t confident in that thing that you sell then how can anyone else have any confidence in it either.

You are looking for your audience to have the confidence to part with their hard earned money and therefore they have to believe in what you’re selling and in order for them to believe it then you gotta believe in it too.

How can you sure this up? I advise that you spend a little bit of time bringing together an “evidence base” about that thing that you’re selling and about that launch you are about to embark on.

Wobbles and self talk simply can’t live alongside evidence that they are untrue.

If you have evidence that they are untrue then those wobbles & that there self talk MUST quell and make way to the real life evidence.

Without evidence to the contrary your mind will seek out evidence that there thing that you’re wobbling about is true, it’ll seek evidence to justify that those wobbles and that self talk is reality. You will be massively distracted from what you’re meant to be doing and instead of being “all in” you will simply go through the motions expecting failure.

Spend a little bit of time writing down…

AND commit to yourself to look through this evidence base on a regular basis throughout your launch. You also need to make sure that you aren’t distracted by self criticism and get back to your implementation work, in a high vibe, as quickly as you can if a wobble strikes ~ so keep the evidence base close by.

This one is incredibly good for setting people off on a wobble and can actually result in people abandoning their launches altogether. It’s the point mid launch, where your enthusiasm may be waning a little and sign ups may slow down a little.

It’s normal to have a lull mid launch. No-one usually tells you this stuff and that results in you thinking that you are lame and not doing things right. You decide that all the sign ups have dried up and that you’re throwing in the towel. It’s normal and it’s to be expected ~ the lull, not giving up.

Make sure you know it exists (you do now) ~ as this knowledge can bolster your launch mindset during these periods anyway.

When you’re looking at your launch plans make sure you have got some exciting activity going on mid launch so that you don’t feel so much of the stalling at this stage.

Know that the only way that the mid launch lull can affect you is if you give up.

Again, another REAL thing. Something that sneaks up and bites your butt towards the end of the launch. You’re tired, you’ve been talking about this thing for AGES and you feel a little bit wrung out.

As much as you need to be prepared and have a (FLUID BUT FOCUSED) plan for your launch period it’s also VITAL that you’re head’s ALL IN too.

These are just a number of ways to help to support your launch mindset.

Your mindset can make or break a launch.

It can be the difference between going through the motions and achieving success.

It can be the difference between giving up and seeing it through.

It can be your best friend or your worst enemy. 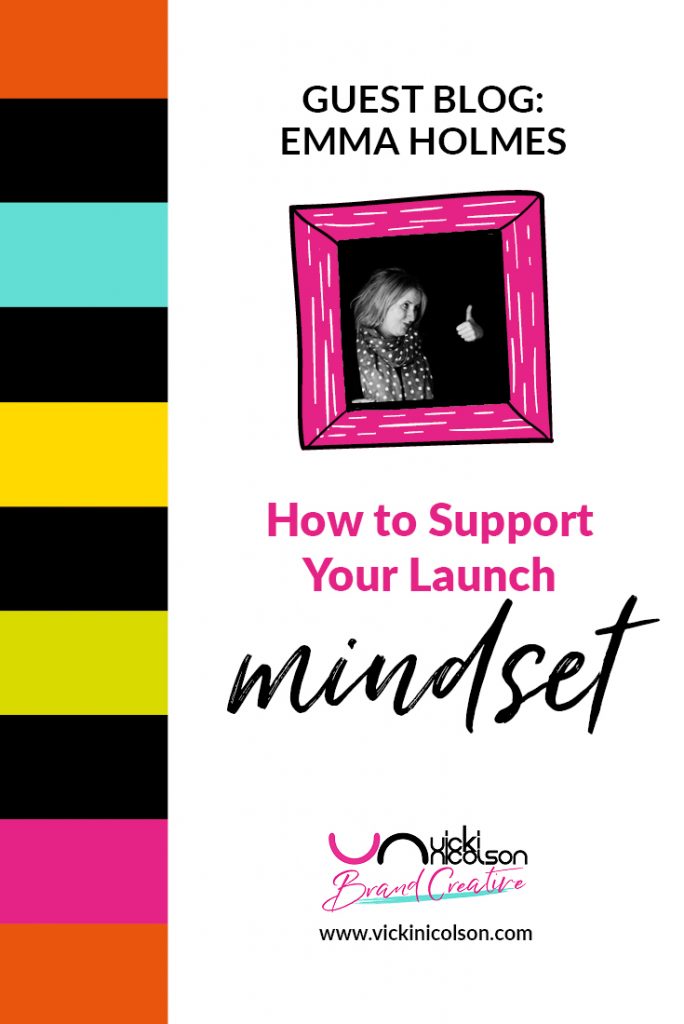 Emma Holmes is the Proud Owner and Founder of Rebels & Rockstars: a hatchery for entrepreneurs with soul.

Helping heart-centred and soulful entrepreneurs to build ridiculously big businesses is her vocation, and she still pinches herself sometimes, that this is actually her job. (She used to be a lawyer who loved living in corporate land, but when mummy guilt arrived, she challenged herself to a new adventure.)

Emma’s also an outsource cheerleader, and a spiritual but practical kind of soul. And she is definitely not scared of a challenge. (She set herself the biggest challenge of her self-employed life in 2015 – to grow a £100k online business without using the ‘tried-and-tested icky sales techniques’ that £100k biz owners usually resorted to.)

Her 2015 success story has since been put to good use (many times), and Emma is positively thrilled to have helped her clients with some pretty amazing online launches – 18k income in one day, launches of £54k+ in sales, and a 30K in 30 days project are just a tiny snapshot of her clients’ achievements.

But what makes Emma beyond ordinary is that she has her own interpretation of business success, and it isn’t about totting up your bank balance. She knows real, long-lasting business success is about creating a sustainable business you love, which grows naturally, fits around your lifestyle and family, and enables your authenticity, and sparkly personality to shine.

In a nutshell, she’s proud to be a square peg who doesn’t care about round holes and fitting in boxes. And she encourages her clients to do the same.

This website uses cookies to improve your experience while you navigate through the website. Out of these, the cookies that are categorized as necessary are stored on your browser as they are essential for the working of basic functionalities of the website. We also use third-party cookies that help us analyze and understand how you use this website. These cookies will be stored in your browser only with your consent. You also have the option to opt-out of these cookies. But opting out of some of these cookies may affect your browsing experience.
Necessary Always Enabled
Necessary cookies are absolutely essential for the website to function properly. This category only includes cookies that ensures basic functionalities and security features of the website. These cookies do not store any personal information.
Non-necessary
Any cookies that may not be particularly necessary for the website to function and is used specifically to collect user personal data via analytics, ads, other embedded contents are termed as non-necessary cookies. It is mandatory to procure user consent prior to running these cookies on your website.
SAVE & ACCEPT